"Is parenting being outsourced?"

"Is parenting being outsourced?" 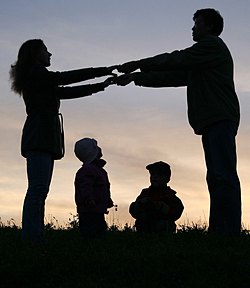 A response to the ChicagoNow blog

The ChicagoNow blog, “Good and Bad Parents” (fantastic title, if your goal is to immediately make me feel defensive...which it probably is) published a post yesterday titled, “Parenting Is Being Outsourced! Is there not enough time or is it too difficult?”

In the article, author Tracy A. Stanciel argues that many parents today are hiring other people to do the hard parts of parenting for them. Among the examples she lists are feeding and changing a baby in the middle of the night, getting children to eat their vegetables and planning a child's birthday party.

First of all, is there some sort of “vegetable whisperer" that I have not been made aware of? What is that job, and how often do the people doing it have total mental break downs? Because I would guess there are a lot of folks being carted away in strait jackets muttering, “Just eat the carrot......why won't he eat the carrot?...”

And second, I think some of the items on Stanciel's list could be considered products of wealth and entitlement, as opposed to laziness and disinterest. There aren't a lot of poor parents out there hiring people to take their kids to the mall.

She really lost me when she added to the list of outsourced parenting tasks, "[paying somone else to] take care of their baby even when one parent does not work.” I am a stay-at-home Mom. About once or twice a week during the summer, I take them to a drop-off daycare for four hours. And I go home and sit quietly. I do not apologize for that – if I did not have those 4-8 hours a week without my kids, I would not be a good mother for the other 160 hours I have them. It is what is best for me AND for my kids.

Stanciel, however, as the name of her blog suggests, paints the issue of parental care in very black and white terms. “I'm tired of getting up in the middle of the night changing diapers and warming bottles for my baby, so I will just hire a night nurse to do it. I don't want to deal with my toddler not eating his vegetables, so I will just hire someone to make him eat.” Let me tell you something, Stanciel. If I could have convinced my husband to hire a night nurse for even one night when my twins were newborns, I would have sold a freaking KIDNEY to pay for it.

If you can pay for a night nurse, and it would help you and your family cope with that difficult transition into parenthood a little bit more easily, then why the heck not?! I don't think that being a martyr and sacrificing yourself on the altar of exhaustion makes you a better or more involved parent. I also don't think taking pain medication during labor makes you a wimp. And it doesn't have to be a matter so someone just feeling “tired of it”. Sometimes, for some families, one night of sleep can make a difference in the health and well-being of your family. But I like to consider those folks who fall in between the lines when making my self-righteous judgments.

She also discusses the benefits of making home-cooked meals rather than eating out. “Children recognize the difference between a home cooked meal and one purchased at a store or restaurant,” she says. Indeed, they do. They know that Raoul the kitchen guy doesn't really love them. But they also know that Raoul makes one hell of a bowl of mac n' cheese. Listen -- I agree that meals at home are better for kids than meals at restaurants or fast-food joints, if just in terms of health. My children don't eat out very often at all. They get to enjoy my home-made peanut butter and jelly sandwiches on an almost-daily basis. But there is an implied, “if you loved your children you would....” that makes me want to say, “you know we're just talking about sandwiches here, right Tracy?”

On the issue of economic class and parenting, Stanciel argues that, “Just because you can afford to do something, doesn't necessarily mean it's a good idea to do it.” Again, I completely agree. And I do not doubt that there are parents out there who pay other people to do some of the less-pleasant tasks of parenting. But, honestly, people. I have other concerns. Do you love your kid? Excellent. Do you and everyone else in your child's life treat them with respect and caring? Fantastic. Do you feed them and stuff? Super. Do you put out your cigarette on them? No? Well, then I think we are all set. Now go write Amber a check for designing your daughter's prom dress.

But Stanciel leaves her final condemnation for parents with full-time help:

“If your nanny or someone else is handling potty training, bicycle training, bedtime stories, discipline, serving meals, kissing boo boos, planning birthday parties, doctor's visits, school plays, shopping and nurturing then why did you have a child? People who don't have the time or the endurance to handle raising children, should not have them. It takes a lot of time and effort to raise children and you should know that going in.”

That's right, working parents. Number one, you should not have had children and number two, fuck you. The “why did you have a child?” argument is a ridiculous one when you are talking about not making it to their third grade play. You can have a child, love that child, be a phenomenal parent and still have a nanny that drives them to gymnastics practice. How many studies have been done that say that it is not about the quantity of time we spend with our kids, but the quality? I could make it to every soccer game and sit in the stands yelling, “Hey Bland! YOU SUUUUUUUUUCK!” But hey, at least I cared enough to be there. Or I could ask them to tell me everything about it when they get home, and share in their excitement and accomplishments.

Parenting, as with most things in life, is rarely black and white. Families are diverse, lifestyles are unique and to waste any time telling parents who love and care for their children that they are not doing enough because they don't do this or that, seems deeply unfair to me. I hope that same kind of acceptance and sensitivity is something my children will get from me...even if I don't bake their birthday cakes myself.