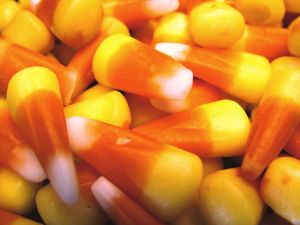 Halloween is over and the kids have counted their haul. My boys fall into two categories when it comes to candy. My oldest carefully selects two pieces for Halloween night, then he allows himself one piece a day until it's gone. His yearly goal is to stretch out his Halloween treats until Christmas. He has done this since he was little. I have never even tried to monitor his candy intake, because he does it so well himself.

My seven year old is a different story. He didn't even possess a sweet tooth until he was two. When he did finally discover sweets, he was smitten. We tried free access to candy with him, and it backfired. He ate almost all of it in one evening and ended up sick for two days. We hoped that cured him, but the following year we caught him doing the same thing and had to take the candy away.

Now, he's an organized kid. The first order of business on Halloween night is organizing the candy by type and size. But once organized, the face stuffing begins. I'm not the type to take their candy and give it away, or to do a silly candy trade for a toy or money, but we have to do something.

So the candy ends up in a high cabinet, with a piece doled out after each meal. He gets to choose the piece, and he usually begs for extra (we don't give in). His brother has learned to be secretive about his stash, since youngest usually runs out much earlier than he. The reward of no upset stomach is well worth the sneaking around and candy policing, though.

How do you manage candy in your home? Do you have a kid with self control, or must you watch the candy bucket like a hawk until it's finally empty and you can breathe a sigh of relief?